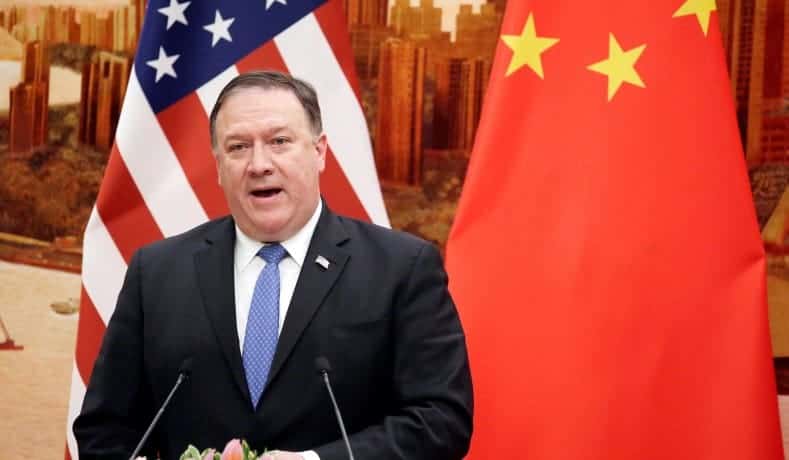 Before Joe Biden had even completed his inaugural address, the Chinese Foreign Ministry delivered a gift to the administration that had left office just moments earlier. Accusing “anti-China politicians” of self-interestedly implementing “crazy moves which have gravely interfered in China’s internal affairs,” the Chinese Party-state slapped sanctions on what is says are 28 former U.S. officials (though it only names a few of them). From the Chinese government’s press statement:

They include Michael R. Pompeo, Peter K. Navarro, Robert C. O’Brien, David R. Stilwell, Matthew Pottinger, Alex M. Azar II, Keith J. Krach, and Kelly D. K. Craft of the Trump administration as well as John R. Bolton and Stephen K. Bannon. These individuals and their immediate family members are prohibited from entering the mainland, Hong Kong and Macao of China. They and companies and institutions associated with them are also restricted from doing business with China.

As might be expected, the effect of these “sanctions” is largely symbolic — there’s little doubt that these particular officials already had the good sense to stay away from jurisdictions over which Beijing can exercise some control (likely including countries that have extradition treaties with China and Hong Kong).

This isn’t the first time that Beijing has targeted U.S. officials this way. In August, the Chinese made a similar move to impose sanctions on eleven Americans, including a few lawmakers, for their support of the Hong Kong pro-democracy movement. They mostly took that as a badge of honor, and the latest crop of China hawks designated today will certainly see it that way as well.

So why go after these top Trump officials who have already exhibited no qualms about losing potential business opportunities in China? Some observers, such as Joe Moschella, say that it’s a shot across the bow for the Biden administration, and a warning about the consequences that will follow if the new team builds on what the previous administration did, particularly with regard to Taiwan. This ham-fisted attempt at sending a message to the new administration probably won’t deter it from doing the right thing and maintaining Trump-era policies designed to counter the Chinese Communist Party, though.

As a new president settles into the Oval Office, Beijing is flat-out stating what emerged months ago as the conventional wisdom in the United States: The Chinese Party-state doesn’t want a “reset” or productive ties. It wants a pliant adversary over which it can one day assert dominance.