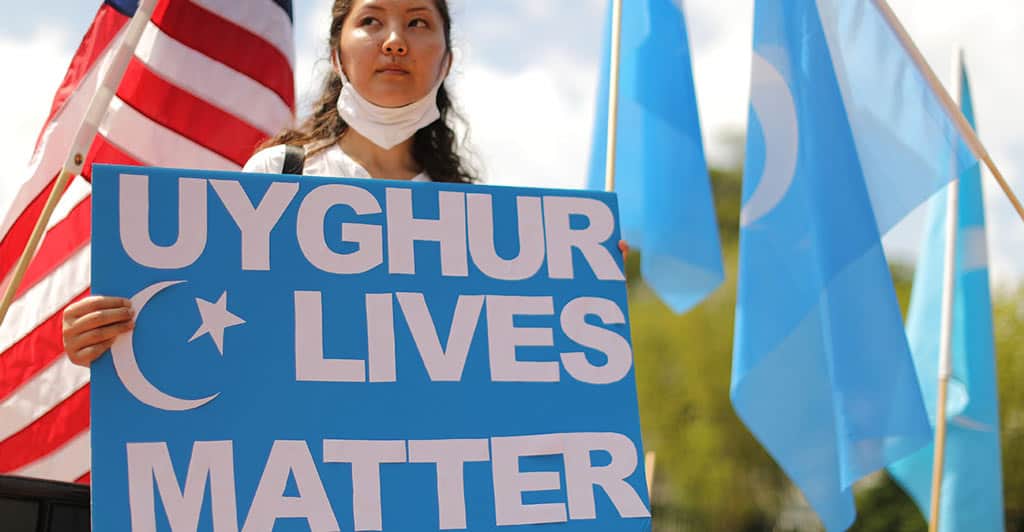 A woman who claims she formerly taught in Uighur detention camps in China said she witnessed conditions of the facilities and alleged that she heard screaming during interrogations of prisoners in an interview with Radio Free Asia.

Fifty-one-year-old Qelbinur Sidik has told multiple media outlets, including Radio Free Asia, that she was forced to teach classes in Uighur detention camps, and has told The Guardian that the Chinese government forced her to be sterilized at the age of 50.

“In 2017, just because I was an official worker in a school, they gave me a wider choice to have this IUD or sterilisation operation,” she told The Guardian. “But in 2019 they said there is an order from the government that every woman from 18 years to 59 years old has to be sterilised. So they said you have to do this now.”

“I said my body cannot take it, but they told me ‘you don’t want children, so you have no excuse not to have the sterilisation operation,” she told The Guardian.

Sidik formerly taught children Mandarin Chinese in elementary schools beginning in 1990, she told Radio Free Asia, before she was forced in 2017 to teach Mandarin to men interned at Camp Fangqou and to women held at a camp in the Tuquong district.

“On Feb. 28, 2017, the school principal called me in and told me I needed to go to a government office, a Party office, for a meeting,” Sidik told Radio Free Asia. “What they told us was that there was a school for illiterate people, and we would be teaching Chinese there starting March 1, 2017. They said that it was going to be secret, and that we should not tell anyone about what we saw and heard in the place where we were going to be working.”

Sidik described going to the camp, watching the men enter the classroom with their hands and feet tied up. Some of the men cried as they sat before her, she said.

“Their steps were heavy,” Sidik said. “I just stood and watched them … When I went into the classroom, the students were quiet. There were no tables. They were sitting in small chairs … Because they’d all just been brought in, the men still had beards [that were later cut off]. I noticed many of them looked like religious people, religious leaders. I said ‘assalamu alaykum’ to them, and they all sat there quietly and said nothing. I realized I’d said something wrong.”

“The women’s camp was even tougher,” she said. “Such fear. It was even more closely guarded than the men’s, and there were fenced-off areas you had to go through as you moved between floors, so tightly closed off that not even a fly could get through.”

The men’s camps did not have a shower, Sidik said, and each man had a minute to use the bathroom and a minute to wash their hands and faces. Women’s cells had a “partial wooden wall” where women could go to the bathroom in a bucket, she said. The women could shower for 10 minutes once a month in a communal shower, she added.

Sidik said she was ordered to teach political songs to the prisoners, who had to memorize the songs.

“We might teach a couplet one day and they would test them back in the cell,” she said. “They wouldn’t give food to someone if they couldn’t recite it.”

She also described overhearing interrogations in the camps, saying that men would be interrogated during lunchtime.

“In the men’s camp I heard, and I saw, that there was an interrogation room underground,” she said. “Sometimes when I was teaching class, the police would come and take people away to go there. We could hear them while we were in class, the sounds of screaming voices … I wondered what kind of interrogation they were even doing. I’d seen things like this on TV and wondered whether it was really so terrifying. It was.”

She continued: “I heard about a man who got very badly hurt in the process of interrogation. They wouldn’t give him medicine or treat him, and the wounds festered. Later, they finally took him to the hospital but weren’t able to save him, and he died. I also heard about people who lost their minds, who went crazy.”

Sidik said she would question a female “police officer acquaintance” about interrogations in the women’s camps.

“We would speak occasionally in the hallways, in places on the camp grounds that didn’t have cameras,” she said. “She told me things in secrecy, like that … the police officers would take groups of four or five girls in for interrogation and take turns with them.”

“You can’t see and hear these things and think they’re simply committing cultural genocide or that this has to do with religion,” she said. “This is about eliminating the Uighurs … I’ve seen it with my own eyes, and I have to make sure others hear about it … I can’t sleep at night. I see all of these things as if they’re in front of my eyes again. It would be great if I could just live in peace. I can’t smile anymore. I wish I could simply wipe my heart and mind clean.”

READ MORE AT THE DAILY SIGNAL

An initiative aimed at clarifying the stark differences between the tyranny that is the inevitable result of Marxist revolutions and the liberties guaranteed in the United States’ constitutional Republic.