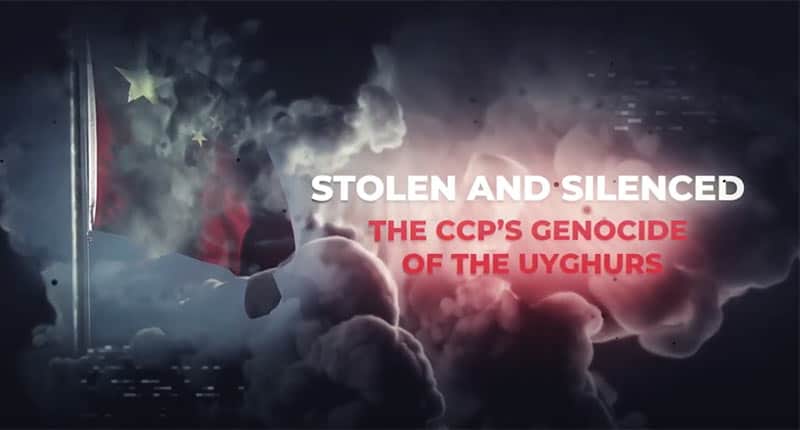 Committee on the Present Danger: China Calls on Biden to Brand the Party as a Transnational Criminal Organization

WASHINGTON, D.C.— On his last day of extraordinary service as Secretary of State, Mike Pompeo formally designated as “genocide” the Chinese Communist Party’s horrific repression of Uyghur Muslims and other ethnic minorities in the Captive Nation its inhabitants call East Turkistan, and their PRC oppressors depict as Xinjiang. Secretary Pompeo declared:

“I have determined that the People’s Republic of China is committing genocide and crimes against humanity in Xinjiang, China, targeting Uyghur Muslims and members of other ethnic and religious minority groups … I believe this genocide is ongoing, and that we are witnessing the systematic attempt to destroy Uyghurs by the Chinese party-state.”

Compelling support for this bipartisan condemnation of the Chinese Communist Party and its crimes against humanity is presented in a newly released short-film posted this week by the Committee on the Present Danger: China. Entitled “Stolen and Silenced: The CCP’s Genocide of Uyghurs,” this 13-minute video chronicles the suffering of the CCP’s individual victims, their families, and communities.

“Stolen and Silenced” documents how the Uyghurs and other ethnic minorities are being subjected to brutal imprisonment, forced labor and horrific social policies designed to extinguish not only their culture and beliefs but, as Secretary Pompeo put it, advance “the systematic attempt to destroy Uyghurs by the Chinese party-state.” The film depicts Xinjiang Province as a surveillance state – a virtual prison – where every citizen is tracked by state-operated cameras and given a social credit score based on their activities. Those caught praying or committing other acts deemed as impermissible by the CCP have long been subjected to beatings, rape, incarceration and even murder.

Since 2016, however, such punishments have been immensely intensified and applied to at least one million – and by some estimates as many as three million – ethnic Uyghurs and other minority groups in East Turkistan, who have been ripped from their homes and imprisoned, often for many years, in so-called “reeducation camps.”

Uyghur women, demeaned publicly by Chinese officials as “baby-making machines,” are being forcibly aborted or sterilized on an industrial scale. Many of those whose menfolk are in the concentration camps are compelled to cohabitate with Han Chinese men in what amounts to state-sponsored rape.

The U.S. Congress has already determined that the concentration camps in East Turkistan are used as forced-labor factories, prompting bipartisan majorities to condemn and punish the CCP for this crime against humanity.

In “Stolen and Silenced,” the Committee presents the compelling personal stories of two victims of the Uyghur genocide whose family members have been “disappeared” and are still missing – lost to the camps. Even living here in the United States as asylum seekers, they speak of being stalked and hounded by CCP thugs looking to force their return to China. Nonetheless, concern about their plight of their family and people compels them to speak out.

Unfortunately, these are but a few of the myriad crimes being perpetrated by the Chinese Communist Party within the People’s Republic and around the world, including here in the United States, in violation of American norms, statutes and/or international law. Consequently, the CCP is properly described as a transnational criminal organization (TCO) as defined in President Trump’s Executive Order 13773, Enforcing Federal Law With Respect to Transnational Criminal Organizations and Preventing International Trafficking. That directive made it U.S. government policy to “pursue and support additional efforts to prevent the operational success of transnational criminal organizations and subsidiary organizations within and beyond the United States, to include prosecution of ancillary criminal offenses.”

Pursuant to Executive Order 13773, the federal government has previously identified a number of entities as transnational criminal organizations, including Hezbollah, which then-Attorney General Jeff Sessions designated as a TCO on October 15, 2018.  In the years since, successive U.S. officials have publicly described the CCP’s various criminal activities, establishing the predicate for such a designation of the Chinese Communist Party.

Taking this step, especially in light of the Party’s now-formally recognized state-sponsored genocide, would help delegitimize the CCP and discourage U.S. persons and entities from participating in, contributing to, or otherwise enabling, its activities, lest they be identified as accomplices. A popular expression of support for such a designation was conveyed on July 23, 2020. It should be executed immediately by President Biden.