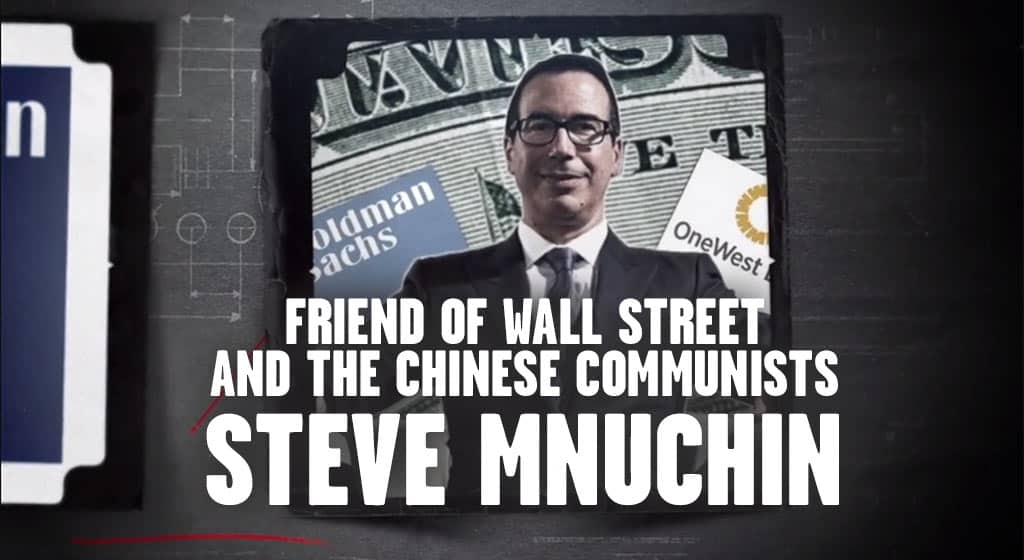 WASHINGTON, D.C.— The Financial Times and other media outlets have exposed a furious fight within the Trump administration precipitated by a last-minute effort by Wall Street insiders to sabotage one of Donald Trump’s most important countermeasures to the threat posed by the Chinese Communist Party: “Executive Order on Addressing the Threat from Securities Investments that Finance Communist Chinese Military Companies.”  With this Executive Order, the President thus blocked indexes and Exchange Traded Funds from investing Americans’ money in Communist Chinese military companies and their subsidiaries.

Some of those covered by this directive, including MSCI and FTSE Russell, have wisely begun to dump such stocks. Others, however, have done what “Beijing’s Bankers” on Wall Street and their client, the CCP, have routinely done in such a circumstance: use their power, resources and influence here to serve China’s interests, rather than this country’s.

“…Wall Street had a very profound influence over America’s domestic and foreign affairs since the 1970s. We used to heavily rely on them. [The] problem is the role of Wall Street has been declining since 2008. But most importantly, after 2016…Wall Street couldn’t control Trump … During the U.S.-China trade war, they tried to help. My friends in U.S. told me that they tried to help, but they couldn’t.”

Yet, the President’s unprecedented record of standing up to and countering the CCP has repeatedly been undermined by what Dr. Di would call “an old friend” of China: Treasury Secretary and Wall Street veteran and ally Steven Mnuchin.

Here’s how the Financial Times described Mnuchin’s current effort to sabotage Mr. Trump’s latest and arguably his most decisive, measure to date for countering the Chinese threat by banning U.S. investments in People’s Liberation Army front companies and their subsidiaries:

“Three people familiar with the internal debate said Treasury wanted to exclude Chinese subsidiaries from the ban, but that effort is being fiercely resisted by the State Department and Pentagon, which have argued that not including the subsidiaries would significantly weaken the overall impact of Mr. Trump’s order.”

As is so often the case, the key arguments for opposing, not enabling the PRC, have been most articulately advanced by Secretary of State Mike Pompeo. The FT reported that:

“‘The money flowing into these index funds … supports Chinese companies involved in both civilian and military production,’ he said. ‘Some of these companies produce technologies for the surveillance of civilians and repression of human rights, as is the case with Uyghurs and other Muslim minority groups in Xinjiang, China.’”

“Mr Pompeo said some of the Chinese companies in the MSCI indices presented ‘significant national security and humanitarian concerns for the United States’ which exposed them to possible U.S. sanctions.”

The Chairman of the Committee on the Present Danger: China, Brian T. Kennedy, weighed into the internal debate with a forceful appeal to President Trump to reject Mnuchin’s perfidious attempt to prop up the Chinese Communist Party:

“The Committee on the Present Danger: China believes that the intent of the E.O. is clear and that preserving its integrity is of the utmost importance to the national security of the United States.  We would regard any diminution of the protection it currently affords American retail investors and to our defense and human rights priorities as a serious and unconscionable dereliction of duty and would oppose it accordingly.”

As the Committee noted on December 14th: “Mnuchin’s behavior has long been dangerous and insubordinate. Now, it has become absolutely intolerable. Consequently, the Committee on the Present Danger: China has today posted a powerful DivestChina.org video calling him out for it.”

With the [recent] dismissal of Attorney General William Barr…it’s time for the next Trump Termination Tweet to be sent to China’s old friend, Steve Mnuchin.”