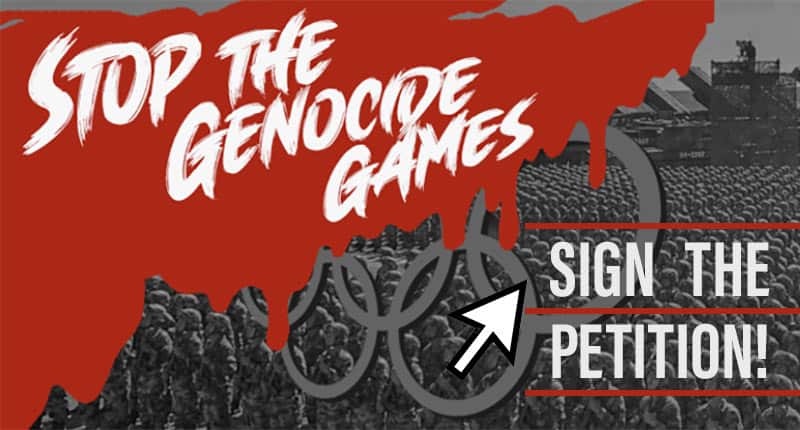 Action Needed to Respond to China’s Myriad – and Worsening – Crimes Against Humanity; Hold ‘Freedom Olympics,’ Instead

WASHINGTON, D.C.—The Committee on the Present Danger: China, (CPDC) and Women’s Rights Without Frontiers (WRWF) released today an open letter urging the United States Olympics Committee to move the 2022 Winter Olympics out of China. Failing that, the signatories declared that they would mobilize with others to boycott what amount to “Genocide Games.”

Signing for the sponsoring NGOs were CPDC Chairman Brian Kennedy and Reggie Littlejohn, the founder and President of WRWF.  Among the 108 other signatories who joined them are many luminaries – including courageous Chinese freedom-fighters and human rights activists like Chen Guangcheng, Wang Dan, Bob Fu, and Teng Biao – and luminaries from a broad range of disciplines like: Rep. Frank Wolf (Ret.), Frank Gaffney, Eric Metaxas, Kelley Currie, Ellie Cohanim, John-Henry Westen, Fr. Frank Pavone and George Weigel.

The Open Letter begins with a powerful reminder: Adolf Hitler shamelessly exploited his role as host of the 1936 Olympics in Berlin to legitimate his regime, consolidate power and prepare to mount the Holocaust and launch World War II.

Today, we are witnessing another totalitarian regime determined to use the 2022 Beijing Olympics to advance its quest for absolute control at home and global domination abroad. This prospect has become all the more abhorrent in the wake of the U.S. State Department declaring that the Chinese Communists are engaged in an ongoing genocide against millions of Uyghurs and other ethnic minorities in Xinjiang Province.

The letter makes clear that the Chinese Communist Party (CCP) is perpetrating a host of other, egregious crimes against humanity, including: religious persecution, forced abortion and sterilization, involuntary organ harvesting, forced labor, mass surveillance, detention of dissidents, unrivalled environmental predation, and the deliberate unleashing of the coronavirus pandemic on the world.

The Open Letter signers warn: “The CCP will no doubt exploit the ‘Genocide Games’ as proof that the world is indifferent to, if not actually implicitly endorsing, its crimes against humanity.”

Honoring a regime that is possibly the greatest human rights abuser in the world with the privilege of hosting the Winter Games runs directly counter to the Olympic Charter. It also does a grave disservice to the world’s finest athletes, many of whom want no part of competing as guests of a murderous and repressive regime.

Moreover, under the 1948 Genocide Convention, the U.S. government is required to “punish” anyone found to be committing genocide. It is utterly abhorrent to think that – far from punishing Xi Jinping and his accomplices for this and other crimes against humanity – we might actually be rewarding their transnational criminal activity.

The signatories, therefore, urge the U.S. Olympic Committee (USOC) to lead an urgent international effort to move the Olympics away from Beijing to another venue outside China, either in the United States or elsewhere. They seek a “Freedom Olympics” alternative to the “Genocide Games.”  If the signers do not hear back from the USOC by April 25th, they have announced their determination to press for a boycott of the 2022 Winter Olympics.

Others determined to join this fight against tyranny and for the Freedom Olympics are invited to learn more and sign a petition at GenocideGames.org. Do it today!